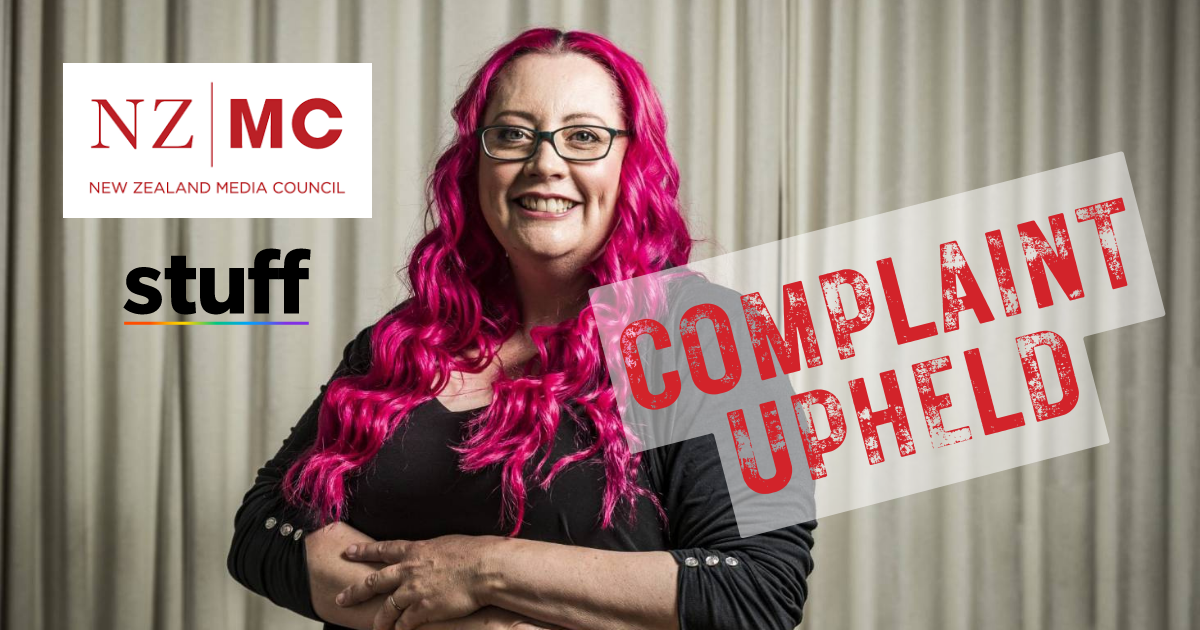 Graham Adams: Wiles faced flak last year for her role in the debate over including mātauranga Māori in the school science curriculum. Now a ruling by the Media Council has her back in the firing line.

OPINION: Dr Siouxsie Wiles must by now have a good appreciation of the truth of the adage: “One day you’re the pigeon; the next day you’re the statue”.

A year ago, she was flying high. On 31 March 2021, she was made New Zealander of the Year for her leadership in the country’s Covid-19 response. She was presented with the award by Prime Minister Jacinda Ardern at a gala dinner in Auckland attended by 800 people.

Elle Hunt, writing for the Guardian, summed up the glittering evening in hyperbolic fashion: “New Zealand’s pandemic success made manifest.”

On July 6, Dr Wiles was presented with the Critic and Conscience of Society Award, worth $50,000, given to academics who provide the public with independent, expert commentary on issues affecting the community.

Unfortunately, since those heady days, Dr Wiles’ reputation has taken a series of blows, including a brief furore over a video taken during last September’s Level 4 lockdown that showed her and another woman at an Auckland beach they had cycled to. They were chatting mask-less on the sand before the friend went into the water for a swim.

However, it was her response to a letter written by seven eminent professors from the University of Auckland published by the Listener last July that put her under the harshest and most persistent spotlight.

That spotlight shone again on her this week with the Media Council issuing a stinging rebuke to Stuff for having published — and failed to quickly correct — a damaging and untrue allegation of intimidation made by Dr Wiles in a column about the professors and the ongoing mātauranga Māori debate they had sparked.

Wiles’ column, published on December 20, was just the latest instalment in the debate that has flickered and flared since last July.

In their Listener letter, the professors had argued, politely and respectfully, that Māori knowledge did not deserve to be given equal status alongside science in the school NCEA syllabus, as a Government working party proposed.

They acknowledged that mātauranga Māori was “critical for the preservation and perpetuation of culture and local practices, and plays key roles in management and policy” but they asserted it wasn’t science.

In response, Dr Wiles and her Auckland University colleague Professor Shaun Hendy — both prominent voices in the Government’s Covid strategy — wrote an open letter criticising the professors’ views. More than 2000 academics and researchers signed it in support.

Although the letter seemed to lack logic in places — particularly the claim that “putting science on a pedestal” doesn’t help combat crises like Covid, which  psychologist Steven Pinker described as “obviously nonsense” — it is not unreasonable to present an open letter criticising others’ views.

Unfortunately, Dr Wiles also sent an inflammatory tweet to urge her academic peers to sign: “Calling all academics in Aotearoa New Zealand. Add your name to the open letter if you are also appalled by that letter claiming to defend science published last week in the NZ Listener. It’s caused untold harm and hurt & points to major problems with some of our colleagues.”

At that point, in many people’s minds Dr Wiles had crossed a line into encouraging what looked suspiciously like a pile-on against fellow academics with a view to silencing them.

Things got worse for her when the Royal Society Te Apārangi, New Zealand’s premier academy for the sciences and humanities, began disciplinary action in November against the three professors who were Fellows — Robert Nola, Garth Cooper and Michael Corballis (who has since died). The action was sparked by complaints about their having signed the Listener letter — although it should be noted that Wiles says she was not one of the complainants.

The news of what was quickly dubbed an “inquisition” at the hands of the Royal Society aroused the interest — and outrage — of some of the world’s most celebrated scientists, including Richard Dawkins, Steven Pinker and Jerry Coyne.

“No indigenous myths from anywhere in the world, no matter how poetic or hauntingly beautiful, belong in science classes"
Dr Richard Dawkins

It also aroused the interest and outrage of some of the UK’s most celebrated newspaper columnists, including the Spectator’s Toby Young and the Sunday Times’ Rod Liddle.

To defend her honour in the face of international criticism about her role in the mātauranga Māori debate, Wiles wrote a column published by Stuff on December 20 titled, “Academics: Use your mana to aid colleagues, not fight them”.

The column began: “Over recent weeks people writing for the UK’s Daily Mail, Spectator, and Sunday Times have accused me of ‘attacking’ and ‘cancelling’…” university colleagues.

Wiles’ rather confused argument seemed to be that by opposing the inclusion of mātauranga Māori in the school science curriculum and stating it was not science, the professors were not doing enough to break down “systemic barriers… for Māori and Pacific peoples within our academic institutions”.

She explained what had originally motivated her: “The reason I got involved [in the debate over mātauranga Māori] is because those professors and Fellows have influence and power over people’s careers. Astonishingly, some are now intimidating junior colleagues with lawyer’s letters.”

This was an extraordinary allegation and the Media Council’s ruling, issued on Monday, made it clear the professors had never sent “intimidating lawyer’s letters”.

What happened was that two of the professors had made a request under the Privacy Act for personal information the university held about them. It appears the university had then sent lawyers’ letters to staff members as part of its obligation to fulfil the requirements of the Act.

As one of the professors, Kendall Clements, pointed out: “We had nothing to do with how the university carries out this statutory process.”

The council — headed by Raynor Asher, a former Court of Appeal judge — pulled no punches in assessing just how serious and damaging the unfounded allegation about intimidation was:

“The council agrees that the statement was inaccurate. It appears plain that none of the named professors were involved in intimidating junior colleagues with lawyer’s letters.

“[The council] is of the view that this is a most serious allegation to make, striking at the heart of academic freedom by asserting that the Professors were trying to stifle opposing views using lawyers’ threats. It required immediate public correction.”

The council made clear its disapproval of how long it took Stuff’s editors to attempt to adequately correct Wiles’ allegation after the professors had told them it was untrue:

“The inaccurate statement remained on Stuff from 20 December to 5 January. This is in our view an unnecessarily long delay before making an unambiguous correction to an inaccurate and significantly damaging statement about the six complainants.”

The news of Wiles’ allegation of intimidation spread quickly after her column appeared on December 20. People who knew I had written several articles about the stoush over the Listener letter, and that I had taken a close interest in the mātauranga Māori debate generally, contacted me to ask whether I believed it to be true.

The day after her column appeared, I emailed Dr Wiles to ask her several questions, including what evidence she had for her claim and who exactly among the seven signatories to the Listener letter had intimidated “junior colleagues with lawyer's letters”. It was obvious that by not specifying which of the professors had allegedly sent such letters, Wiles had sullied all their reputations.

I received no reply.

Stuff is obliged by its membership of the Media Council to run a prominent summary of the ruling — and to link to the full text — which it has done.

But what of Siouxsie Wiles? After last year’s New Zealander of the Year ceremony she was reported as saying that being draped with the ceremonial woven flax cloak, titled Pouhine, by the Prime Minister and the previous year’s winner, Jennifer Ward-Lealand, was “heavy — physically and emotionally”.

“It’s lovely, and a real privilege… I hope to do us proud.”

Will she now publicly apologise to the professors for the unfounded and damaging allegation she made about them, if only to preserve the mana of the award?

Many would think we should expect nothing less of the reigning New Zealander of the Year.