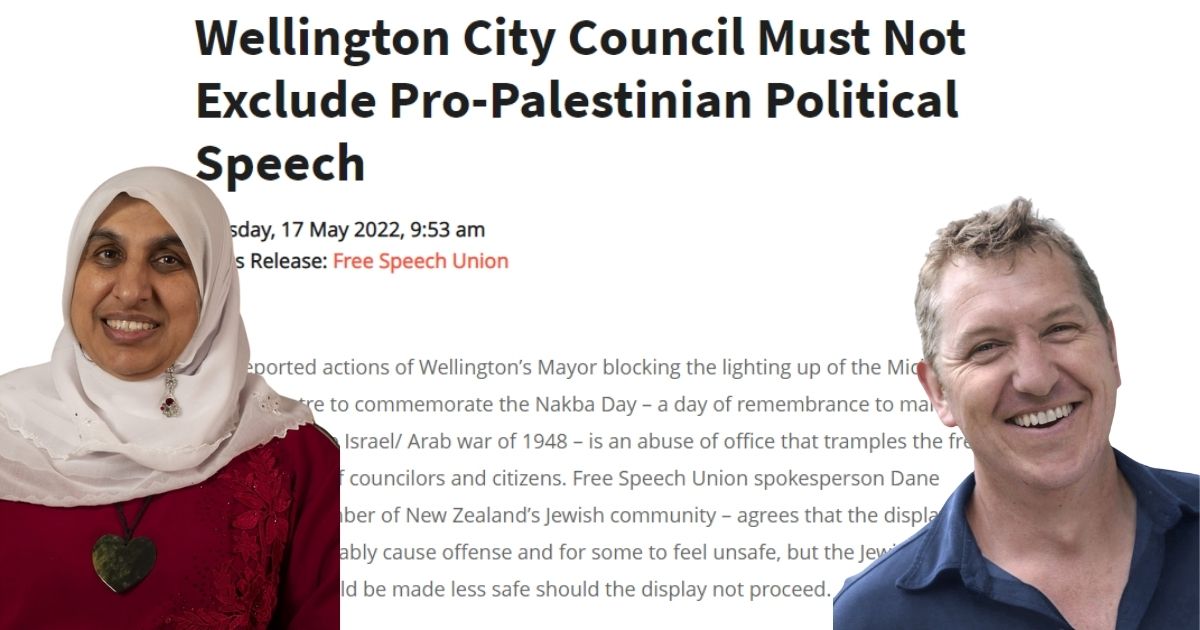 Dane Giraud: But there was a problem with her thread, and not an insignificant one. Absolutely everything she claimed in it was false.

OPINION: Last Thursday Anjum Rahman, the former National Coordinator of the Islamic Women’s Council of New Zealand, took to Twitter to drop a ‘truth bomb’ on the hypocrisy of the Free Speech Union. Her beef with us was due to our not having sued Wellington City Council after Mayor Andy Foster vetoed a lighting display in solidarity with the Palestinian cause, when our organisation had (according to her) happily gone into bat for “white supremacist speech.”

Rahman continued that our actions, or lack thereof, made clear “whose speech rights are funded and defended, how and why.” She rounded off with her by now standard pro-censorship pitch, that:

It’s just another example of how free speech arguments are most often used to defend racist and discriminatory speech.

Her thread was liked by journalists such as Russell Brown and Greens co-leader Marama Davidson. But there was a problem with her thread, and not an insignificant one.

Absolutely everything she claimed in it was false.

For a start we had released a statement only days earlier in support of the councillors and their pro-Palestinian display.

Granted, no one had suggested suing the council, but what law was Mayor Foster breaking exactly? Were councillors legally entitled to use the city’s resources, at the rate payer expense, to protest pet causes?

Nevertheless, we did feel there was a principle to defend, and went on record. I even appeared on Newstalk ZB reiterating our position. So, Anjum’s view that the Free Speech Union was being selective here, and ignored this case based on some partisan political outlook was a total fiction.

Anjum also misrepresented the 2018 Auckland City Council case to her followers. The case was never about defending the content of the speech of Lauren Southern and Stephan Molyneux (the Canadian YouTube provocateurs denied use of a public venue). It has always only ever been about the use of public venues.

The same excuses used to shut down the Southern and Molyneux talk could easily be applied to any public talk, including one centred around the pro-Palestine cause.

All it would take to cancel such an event would be a single threat, and the ‘thugs veto’ (that we saw employed in the Auckland case) could rule the day. We found this unacceptable. If we finally win this case, it will be a win for access to public spaces, and not for a single voice or view, but for all New Zealanders. That includes pro-Palestinian ones, who cannot currently guarantee a talk of theirs would proceed in a public space, due to the dangerous precedent set by Auckland Council.

It’s just another example of how free speech arguments are most often used to defend racist and discriminatory speech.

I would not say free speech arguments are ‘most often’ used to defend racist and discriminatory speech, but in the case of my defending this specific pro-Palestine display, many would certainly make the case that I was defending racist speech. The Nakba (translated as ‘Catastrophe’) marks a failure of five invading Arab armies to destroy the newly minted Jewish state. Ask Anjum and others what would have happened to the Jews of the Levant had these Arab armies won and you will get in response a sidestep worthy of the Dancing with the Stars trophy. My personal justification for allowing the display (and I speak solely for myself and no other council member here) is, had it been banned, it may very well have led to increased resentment against my (Jewish) community. Take people’s words away and they are more likely to pick up a stone.

Anjum potentially needs to accept that plenty of people would question whether her own views are harmful, and if the culture of censorship she is promoting could be used in future to silence her.

Anjum’s thread ended with the truly extraordinary statement that free speech primarily serves racists and those in power. The late Dr. Moana Jackson made the same argument in his 2018 essay “Rethinking Free Speech”, and both he and Anjum could not be more wrong.

Free Speech has always, and will always favour minority groups and minority views. This is what made it such a societal innovation.

We have endless examples to make this case for us, from the civil rights movement, gay liberation, and the women’s movements through to the collapse of the cultural hegemony of the church in the West. As a free press continuously has demonstrated, power is not protected by free speech, but is made vulnerable by it. A pen can literally take down a government. The idea free speech ‘upholds power’ is really a nonsense that even the most a cursory understanding of history quickly blows out of the water.

Anjum had to acknowledge our statement when I brought it to her attention, but still said that her overall point stood. I hope I have demonstrated her points do not stand at all. Anjum’s misrepresentation of the Free Speech Union, her lack of understanding of free speech as a principle, along with its history of liberating minority groups and calling power to account is of extreme concern considering she is seen as somewhat of an authority on this topic, along with having the ear of government.